Logistics In 2020: Investment In Europe Explodes

This blog has noted many times how the pandemic caused an explosion of ecommerce in 2020. People being forced to stay inside and the closure of brick-and-mortar stores left consumers with little choice but to turn to alternative forms of acquiring goods. More times than not this resulted in them turning to ecommerce. What we haven’t really touched on though is the domino effect this has had on the logistics industry, especially in warehousing. Increased demand for products and the subsequent competition from retailers to offer the best and fastest service has led to a record £35 billion being invested into logistics in Europe.

The Effect On Logistics In Numbers

The aforementioned figure of £35 billion is the highest level of investment for seven years. Research data, analyzed and published by Comprar Acciones, shows that last year 38.64 billion euros was spent on investments in ecommerce logistics. Moreover, leasing activity in Europe increased by 69% last year which covered agreements over that equated to roughly 11 million square meters. Among those who signed leases in 2020 were Amazon, DHL, SF Express and XPO Logistics 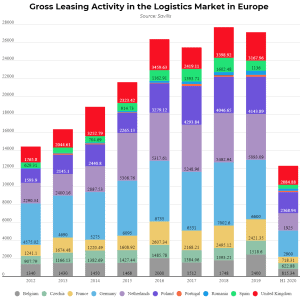 By the end of the year, warehouse vacancy rates in Europe were down to a record 5%. Alibaba, Amazon and third-party logistics service providers were among the key players driving up demand for European warehouses. The clamour for warehouses was likely caused by the severe supply chain challenges faced by all ecommerce providers. By stocking warehouses early, these providers were prepared to deal with the relentless demand for ecommerce.

It’s no surprise that the Amazon and Alibaba topped the list for those who drove up the most demand for European warehouse space. Alibaba handles cross-border ecommerce transactions primarily via its Cainiao logistics arm as well as AliExpress. During the 4th quarter of 2020, both Alibaba and Cainiao saw revenue increase by over 50%. This obviously had a knock-on affect on logistics in 2020.

Meanwhile, for Amazon, there were over 1 billion international product deliveries during the quarter. This resulted in their revenue surpassing $125 billion in the fourth quarter alone. This is the first time they have surpassed $100 billion in any quarter.

The rest of the world also followed suit. A study made by eShop World states that almost 70% of consumers globally made cross-border ecommerce purchases in 2020. China, a front runner in the market, had an increase of 31.1% in cross-border ecommerce to RMB1.69 trillion (USD261.5 billion). To keep up with the increase, there was a surge of 80% in overseas warehouses, bringing the total to over 1,800.

It seems clear that 2020 was a landmark year for ecommerce and the logistics industry.

At J&P, we can offer our warehouse services to ecommerce sellers in the UK and EU. If you are an ecommerce seller, we just want to let you know that we have the qualifications and knowledge to help you plan ahead. Please do not hesitate to get in touch should you have any further questions about logistics and supply chain management or selling on online marketplaces. You can contact us at enquiries@jpaccountant.com, on our social media, or give us a call on 0161 637 1080.