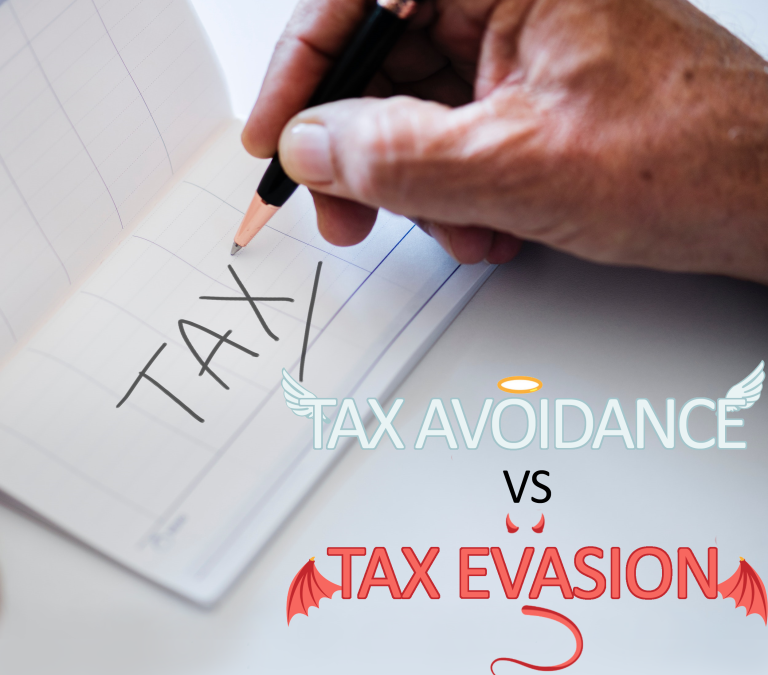 Let’s face it. Nobody likes paying tax. It is a necessary duty we all have to perform, even if we don’t necessarily like it. So here is a thought. Can a good tax accountant help me save money? Yes, he can. And more so, he can help you stay within the law. Careful! There is a thin line between tax avoidance and tax evasion, which can often confuse a lot people. However, there is one thing in particular that separates the two apart; legality. In this article we will be exploring the differences between tax avoidance and tax evasion and provide you with a few examples to help you distinguish the two.

The main difference between the two things we examine today is legality. Avoiding tax is perfectly legal, but once you cross this fine line and evade tax then you are behaving illegally and if HMRC found you out, you at the very least will be issued a hefty fine, which could potentially also lead to prosecution. Tax avoidance is where an individual or company legally exploit the tax system to reduce tax liability. Tax avoidance comes in many forms including tax haven, Individual Savings Account (ISA) and Individual Retirement Accounts (IRA). Each year countless taxpayers are seeking ways to lower their taxable income in attempt to shield more of their hard-earned cash from the taxman. This practice may sound deceitful, but it’s encouraged by the Government provided it is done correctly and you remain on right side of the law.

A good example of legitimate tax avoidance is putting your money into an Individual Savings Account, which will enable you to bypass paying income tax on the interest earned from your savings. Alternatively, you can invest your money in a pension scheme or claim capital allowance.

A tax haven is a controversial technique that permits citizens and companies to pay lower rates of tax than they would in their native countries. There are many tax havens available which have favourable tax laws allowing people to pay lower tax rates in other countries. For example, corporate tax rate for the United Kingdom is 19%, but if a British company were to move its headquarters to Switzerland, then they would be entitled to paying the lower 8.5% corporate tax instead. By doing this, the company books its profits in the tax haven and only has to pay the smaller tax rate instead of paying the country where the actual sales took place. Again, it needs to be said, this is common knowledge and it is perfectly legal.

Tax evasion on the other hand is a crime, it is an illegal practise whereby a citizen or company intents to evade paying their taxes. Common examples of tax evasion include:

Let’s imagine you’re self-employed and regularly paid in cash. Your income totalled £50,000 last year, but you claimed £30,000 on your tax return, forgetting nicely about £20,000, this is actually tax evasion since you’re lying about your income so that you receive a lower tax deduction on your earnings. Similarly, if you were to claim £10,000 in deductions when you’re only qualified for £2,000 in deductions which constitutes tax fraud as well. Fraudulent expenses are another form of tax evasion, whereby an employee incurs a personal expense on the company’s books to recoup it through the company’s capital allowance. For example, an employee decides to purchase a 40-inch television set for their home but claims it to be for business purposes.

Tax evasion or an honest mistake?

According to the IRS, 17% of taxpayers fail to comply with the tax code one way or another when filing their returns, but yet only 0.0022% are convicted of tax crimes. This is because the IRS is capable of establishing what illegal activity is and what’s a genuine mistake. Tax filing is complex so the chances of making small errors are inevitable.

A good safety measure for companies and also self-employed individuals in order to ensure that they remain compliant and not commit tax evasion is to hire a professional accountant who will be able to take great care when managing your books and help you avoid tax, but not evade it. Furthermore, they may also be able to make suggestions on how your business can save money (tax avoidance). As you can see, there is more to this topic than meets the eye. In the future, we will bring similar topics to broaden your basic tax knowledge.

We can help you to stay tax compliant – if you need any assistance, please do not hesitate to contact us on 0191 378 0287 to speak to one of our advisors. Alternatively, you can drop an email to vatdurham@jpaccountant.com.